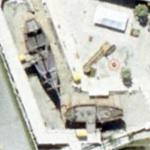 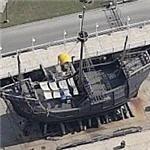 By kjfitz @ 2006-02-27 21:18:45
@ 27.810459, -97.394314
Corpus Christi, Texas (TX), US
In 1983, under the auspices of the Spanish Navy and the Institute of Naval History and Culture, Jose Maria Martinez-Hidalgo was engaged in the study of the three Columbus Ships. Jose Luis Lopez-Martinez was contracted to draw up the construction plans and carry out the strategic planning to create the replicas.

In April 1994 two of the ships, Pinta and Santa Maria, were extensively damaged in a barge accident. The Board of Directors for the Columbus Fleet Association decided that the only economically feasible way to repair the ships was to keep them open to the public, thus preserving cash flow for the fledgling organization. The decision was made to set up a repair facility adjacent to the Corpus Christi Museum of Science and History. In May 1995 the two damaged ships were moved to the dry dock site. One of the Spanish Shipyards that built the ships was ultimately contracted to do the repairs. Nina was moored and remains in the Corpus Christi Marina.
Links: www.ccmuseumedres.com
3,138 views