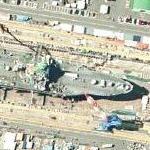 The ship was commissioned on November 14, 1970, at the Philadelphia Naval Shipyard as a command and control platform for the Navy. With accommodations for more than 200 officers and 1200 enlisted, the ship provides all the services of a small town.

From 1971 until 1979, Blue Ridge operated from San Diego, California, where she deployed to the Western Pacific, earning the Meritorious Unit and Navy Unit Commendations for the evacuation of Saigon, Vietnam in 1975.

Since October 1979, Blue Ridge has been forward-deployed to Yokosuka, Japan as the flagship of Commander Seventh Fleet. Blue Ridge participates routinely in U.S. and allied training exercise each year with countries throughout the Western Pacific and Indian Ocean. She performed a nine-and-one-half month deployment as flagship for Commander United States Naval Forces Central Command (NAVCENT) during Operations Desert Shield and Desert Storm from August 1990 through May 1991, for which the ship earned another Navy Unit Commendation.

Blue Ridge frequently makes port calls throughout the Western Pacific and Indian Ocean including Japan, South Korea, Hong Kong, Singapore, Indonesia, Malaysia, Thailand, and Australia. She made her historic port visit to Shanghai, People's Republic of China in 1989 and again in 2004. It also visited Vladivostok, Russia in 1996, 2003 and 2006. The ship has also been cited for rescues of refugees and merchant vessels.
Links: en.wikipedia.org
1,255 views