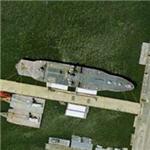 Originally authorized as AGC-20, was reclassified LCC-20 on 1 January 1969, and laid down 6 January by Newport News Shipbuilding & Drydock Company, Newport News, Virginia. The ship is named for Mount Whitney, the 14,505-foot peak in the Sierra Nevada range in California, the highest point in the lower 48 United States.

* She carries enough food to feed the crew for 90 days and can transport supplies to support an emergency evacuation of 3,000 people.

* Her distilling units make over 100,000 US gallons (400 m³) of fresh water a day
* The first U.S. Navy combatant to permanently accommodate women on board.

Considered by some to be the most sophisticated Command, Control, Communications, Computer, and Intelligence (C4I) ship ever commissioned, Mount Whitney incorporates various elements of the most advanced C4I equipment and gives the embarked Joint Task Force Commander the capability to effectively command all units under the command of the Commander, Joint Task Force.

Mount Whitney can receive and transmit large amounts of secure data from any point on earth through HF, UHF, VHF, SHF and EHF communications paths. This technology enables the Joint Intelligence Center and Joint Operations Center to provide the timely intelligence and operational support available in the Navy.

The ship deployed in 1994 to Haiti with Lt. Gen. Hugh Shelton, commander of the XVIII Airborne Corps, in command of the Joint Task Force that conducted Operation Uphold Democracy.

On November 12, 2002, Mount Whitney deployed to the Central Command area of responsibility in support of Operation Enduring Freedom. During the deployment the ship embarked elements of the 2nd Marine Division and II Marine Expeditionary Force (II MEF), based at Camp Lejeune, North Carolina, under the command of Maj. Gen. John F. Sattler.

In 2004, Military Sealift Command civilian mariners were integrated into her crew. She remains a commissioned warship in the United States Navy, but the size of her complement shrank from 600 sailors to approximately 170 Navy officers and enlisted and 155 civilians.