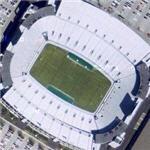 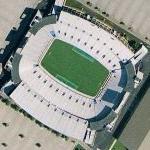 When constructed in 1973, Commonwealth Stadium had a capacity of 57,800. It was completed at a cost of $12 million by the firm of Huber, Hunt, and Nichols. The stadium and parking areas rest on an 86-acre plot that was once part of the UK Experimental Station Farm Grounds.

The stadium was officially opened on Sept. 15, 1973, as the Wildcats moved into their new home after spending 48 years at Stoll Field/McLean Stadium across from Memorial Coliseum. Kentucky defeated Virginia Tech in the stadium opener, 31-26, as quarterback Ernie Lewis ran for two touchdowns and threw for another TD to lead the Wildcats.

Since its opening, Kentucky has played 200 games within the friendly confines of Commonwealth Stadium. And indeed, a 105-91-4 record and a .535 winning percentage is evidence that Commonwealth is a home field advantage for the Wildcats.