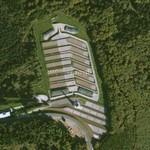 Natzweiler-Struthof was the only concentration camp established by the Nazis on French territory, though there were French-run temporary camps such as the one at Drancy. (At the time, the Alsace-Lorraine area in which it was established had been annexed by Germany as an integral part of the German Reich, unlike other parts of France.)

The writer Boris Pahor was interned in Natzweiler-Struthof and wrote his novel Necropolis based on this experience.
Links: en.wikipedia.org
1,587 views