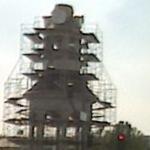 By kkeps @ 2008-12-22 10:55:56
@ 40.17852, -122.235527
Red Bluff, California (CA), US
The Cone-Kimball Building with its famous clocktower stood for 98 years, 1886 to 1984. Pioneer businessmen, Joseph Cone and Gorham Kimball, who wanted to have the best general store building in the region, built it. That they succeeded was attested to by a San Francisco paper of 1889, which stated that the building was “a monument to the industry, energy and enterprise of the owners, the finest business house north of Sacramento and unsurpassed by any in the state…”. Through the years many businesses flourished in the building and improvements were made, but the basic structure and tower remained unchanged. The ornate and beautiful Victorian clocktower was often called “the Heart of Red Bluff”.... and, for good reason. It best symbolized the Victorian background and flavor of the city, and crowned one of the most photographed buildings in the region. When it was lost by fire on April 30, 1984, many felt that they had lost their heart. After the fire a number of citizen committees worked for several years in an effort to determine what to do with the lot. In February 1997 the Red Bluff Rotary Foundation made a decision to purchase the lot for $83,000 and united in a partnership with the Downtown Red Bluff Business Association (DRBBA) and the City to develop a plan to Rebuild The Heart of Red Bluff. Now the community is giving from the heart to rebuild its “heart” in the form of a clocktower replica. Red Bluff will have a historic and nostalgic part of its past brought back to life in the planned plaza, which will include as its focal point a replica of the beautiful Cone & Kimball clocktower.
Links: www.waymarking.com
1,769 views