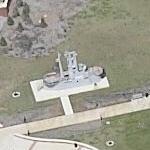 Balao's war operations span a period from 25 July 1943 until 27 August 1945. During this period she completed ten war patrols. She is credited with having sunk seven Japanese ships totalling 32,108 tons, in addition to sinking by gunfire 1100 tons of miscellaneous enemy small craft.

Balao was redesignated an Auxiliary Research Submarine, AGSS-285, in 1960. She was decommissioned, 11 July 1963, and struck from the Naval Register, 1 August 1963. She was sunk as a target, 4 September 1963 off Charleston, SC.; her conning tower and periscope shears were removed prior to sinking as a target for display at the Navy Memorial Museum, Washington, DC.

SS/AGSS-285 Balao appeared as the hard-luck submarine in the 1959 Cary Grant/Tony Curtis motion picture comedy "Operation Petticoat." Through a major portion of the movie, she was painted pink!
Links: www.nuwc.navy.mil
1,204 views