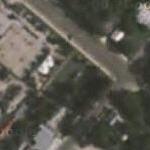 In the Memorial Courtyard of the National Museum of the Pacific War.

While in the Pacific Reserve Fleet, Pintado was reclassified AGSS-387 on 1 December 1962. She was struck from the Naval Vessel Register 1 March 1967 and sold for scrapping 20 January 1969.

Pintado is credited with sinking 8 ships of 42,956 tons. Her conning tower is on display at the National Museum of the Pacific War in Fredericksburg, Texas.
Links: en.wikipedia.org
762 views