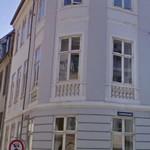 After Mozart's death she met Georg Nikolaus von Nissen, a Danish diplomat and writer who was, initially, her tenant. The two began living together in September 1798, and were married in 1809 in Bratislava. From 1810 to 1820 they lived in Copenhagen, and subsequently travelled throughout Europe, especially Germany and Italy.

They lived in this corner appartment on the first floor from 1812.
Links: en.wikipedia.org
622 views