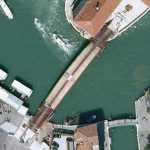 It was designed by Santiago Calatrava, and was moved into place (connecting Stazione di Santa Lucia to Piazzale Roma) in 2007, amid protest by opposition's politicians. It was finished in 2008 and opened to the public on the night of September 11, 2008.
Links: en.wikipedia.org
665 views