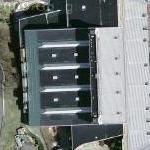 By kjfitz @ 2010-01-01 13:05:15
@ 42.335, -71.1675
Chestnut Hill, Massachusetts (MA), US
The Silvio O. Conte Forum, usually known as the Conte Forum is an 8,606-seat multi-purpose arena on the campus of Boston College in a portion of Chestnut Hill, Massachusetts that lies within the Brighton neighborhood of Boston. Opened in 1988 and directly adjacent to Alumni Stadium (some luxury boxes overlook both the stadium and arena floors), it is home to the Boston College Eagles men's and women's basketball and ice hockey teams. It was built on the site of the former McHugh Hockey Rink, which ran parallel to the stadium rather than perpendicular.
Links: en.wikipedia.org
1,460 views