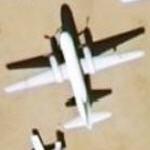 By kjfitz @ 2007-03-16 23:26:07
@ 33.884812, -117.266867
Riverside, California (CA), US
The C-131 was a military transport version of the Convair-Liner 240 built by General Dynamics. It was the first pressurized, twin engine transport ordered by the Military Air Transport Service. The T-29 version of this aircraft filled the back of the plane with student stations and was used to train bombardiers, navigators and electronic warfare officers.

According to the Air Force Historical Research Agency (AFHRA/RSA), Maxwell AFB, AL, the museum's C-131D has the following history:

The museum's C-131 is a D model, serial number 54-2808, manufactured by Consolidated-Vultee, San Diego, CA, and delivered to the Air Force on 19 October 1954. It served with the following locations:

Apr 1975 - To 125th Fighter-Interceptor Group (ANG), Jacksonville AP FL (according to sources at Maxwell AFB this aircraft was most likely used for a general personnel transport and a V.I.P. Transport).

This aircraft made its very last flight from Jacksonville AP FL to March Field in 1989 and officially retired from U.S. Air Force service on May 31st 1989 with a total of 17892.6 flight hours on the airframe. This aircraft is on loan from the USAF.
Links: marchairmuseum.com
632 views