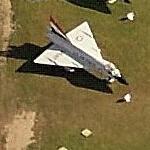 The aircraft's development was long and troubled, and by the early 1960s, it was being supplemented by F-101 Voodoos, replaced by F-106 Delta Darts and later by F-4 Phantom IIs. Many of the F-102s were transferred to United States Air National Guard duty by the mid-to-late 1960s, and the plane left service altogether in 1976.

To train F-102A pilots, 111 TF-102A trainers were developed. The aircraft was fitted with a side-by-side cockpit to facilitate ease of pilot training. This required a redesign of the cockpit and nose incorporating a set of vortex generators on the top of the cockpit to prevent flow separation under certain circumstances, and repositioning of the intake ducts. Despite the many changes, the aircraft was combat-capable, although this variant was predictably slower, only reaching subsonic speeds in level flight.[
Links: en.wikipedia.org
843 views