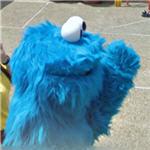 By kjfitz @ 2010-01-22 09:23:44
@ 40.183708, -74.872586
Middletown, Pennsylvania (PA), US
Cookie Monster is a fictional Muppet character on the children's television show Sesame Street. He is best known for his voracious appetite and his famous eating phrases: "Me want cookie!", "Me eat cookie!", and "Om Nom nom nom" (said through a mouth full of food). He often eats anything and everything, including danishes, donuts, lettuce, apples, bananas, as well as normally inedible objects such as salt and pepper shakers, signs, napkins, pencils, typewriters, telephones, motorcycles, Peabody Awards, trucks, a safe, a VW Beetle, and the Letter of the Day. However, as his name suggests, his preferred food is cookies. Chocolate chip cookies are his favorite kind; oatmeal cookies are his second favorite. In a song in 2004, Cookie Monster revealed that, before he ate his first cookie, he believes his name was Sid. Showing awareness of healthy eating habits for children, since 2006 he has said that cookies are "a sometime snack" and that he also likes fruits and eggplant.
Links: en.wikipedia.org
1,084 views