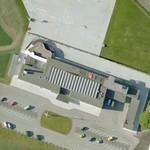 1999 it was removed to it's current position in a one night operation to make place for the new transit hall.

Today it's used as restaurant hall and celebrations.
471 views