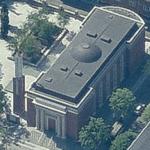 The building of the temple in Denmark was announced on March 17, 1999. On April 24, 1999 the site for the temple in Frederiksberg was dedicated and a groundbreaking ceremony was held. About 700 Mormon members from the area attended the ceremony.
Links: www.churchofjesuschrist.org
846 views