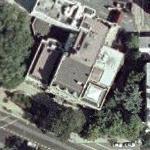 The Cosmos Club stands as "the closest thing to a social headquarters for Washington's intellectual elite." So wrote Western scholar Wallace Stegner in his acclaimed work, Beyond the Hundredth Meridian. His judgment echoed the oft-repeated statement of World War II days that the most significant concentration of Washington's public policy intellectuals centered at the Cosmos Club, unless it was at Union Station when the night train from Boston arrived.

The luxurious taste of the Gilded Age is reflected in the Townsend House, completed in 1901 for railroad magnate Richard Townsend and his superstitious wife Mary Scott. Mary insisted that the architects build her new home around the existing Hillyer house, because a gypsy once predicted that she would die “under a new roof.” The magnificent landscaping is attributed to Frederick Law Olmsted, Jr., renowned landscape architect of the White House the National Cathedral grounds and Rock Creek Parkway. Today the Cosmos Club, dedicated to “the advancement of its members in science, literature, and art” occupies this grand residence.
Links: www.cosmos-club.org
1,539 views