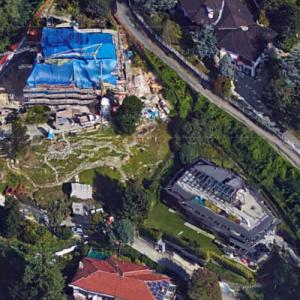 By jdubble07 @ 2018-07-30 11:05:55
@ 45.06024, 7.712169
Turin, Italy (IT)
Portuguese soccer player Cristiano Ronaldo’s house is an 8-bedroom gated double villa on a private road in the foothills of Turin, Italy. The house features a gym, indoor pool, and panoramic views of Turin. It is believed that Ronaldo rents the property, though the terms are unknown. Previous occupants of the house include fellow footballers Zinedine Zidane and Fabio Cannavaro. Ronaldo moved to Turin after signing with Turin club Juventus in 2018.

Ronaldo has previously kept homes in Madrid, Spain and Manchester, England. He has played for soccer clubs in each city. He maintains a 7-story converted warehouse as a residence in his hometown of Funchal in Madeira.

Cristiano Ronaldo’s net worth is $500 million. His deal with Juventus paid him as much as $70 million per season and he earns as much as $50 million annually from endorsement deals with companies such as Nike and Herbalife.

Ronaldo was signed at the age of 12 by Sporting Lisbon and quit school at 14 to focus on his athletic career. At the age of 16 he was promoted to the first team and was so impressive that several major clubs sought to sign him. It was Manchester United’s legendary manager Alex Ferguson who ultimately made the deal—a record £12.24 million transfer, the most ever for a teenager in English football history. After stints with Real Madrid and Juventus, Ronaldo was brought back to Manchester United in August of 2021 in a £12.85 million transfer.

Ronaldo lives with his four children and his girlfriend Georgina Rodriguez, a Spanish model and the mother of his youngest daughter.
Links: en.as.com, en.wikipedia.org, www.velvetropes.com, www.hauteresidence.com, www.celebritynetworth.com
55,750 views