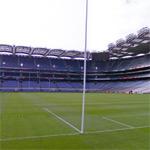 Since 1884 the site has been used primarily by the GAA to host Gaelic games, most notably the annual finals of the All-Ireland Senior Football Championship and Senior Hurling Championship. Music concerts by major international acts have also been held in "Croker", as it is often called by Dubliners, and it hosted the opening and closing ceremonies of the 2003 Special Olympics. During the refurbishment of Lansdowne Road the stadium also hosted the Irish national rugby union and association football teams.
Links: virtualglobetrotting.com
597 views