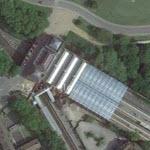 By chaswatson @ 2015-12-06 01:28:20
@ 51.4179924, -0.0727057
London, United Kingdom (GB)
When the Crystal Palace was moved here, from Hyde Park, in the mid 19th century two stations were built to handle the visitors. The Crystal Palace (High Level) station no longer exists but this one, Crystal Palace (Low Level) now known simply as Crystal Palace, remains. The station handles services operated by London Overground and Southern. The tracks and platforms are in a cutting with the ticket hall straddling the tracks at street level. A look over the wall to the west of the station shows the tracks disappearing into a tunnel with them reappearing approximately 700 metres to the north west close to where the High Level station was located.
Links: en.wikipedia.org, www.nationalrail.co.uk
399 views