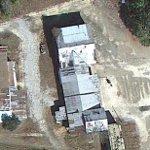 
Founded in 1939 by Roy O. Cumbest (1903-1957) Cumbest Manufacturing Company was a timber, sawmill, and trucking concern, but also had interests that produced duck decoys and duck blinds. The cypress lumber the company harvested was used by the ship building industry, while the ash wood that was harvested was sold to Dodge and Chrysler for use on the exterior of their vehicles. The company operated at this site until 1999 when it closed one year after Roy’s son Lum R. Cumbest (1924-2011) retired as company president.
Links: www.history.com
902 views