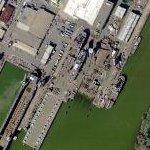 For a century, the United States Coast Guard YARD has built, repaired and renovated ships in Baltimore, Maryland for the U. S. Coast Guard. It is the Service's sole shipbuilding and major repair facility, and an essential part of the Coast Guard's core industrial base and fleet support operations. The YARD annually operates on a $60 million internal revenue.

he Curtis Bay Coast Guard Yard, is a 113-acre federal facility located adjacent to Curtis Creek approximately six miles southeast of downtown Baltimore. The current mission of the Curtis Bay Coast Guard Yard is to provide core industrial support for the Coast Guard, including the design, construction, and repair of ships and boats. The Yard at Hawkins Point was originally established in 1899 as a Coast Guard training academy and boat repair facility. Industrial development began at Hawkins Point around 1906. By 1910, the Yard had become a fully operational ship-building and repair facility. The Yard reached its peak of development during World War II, with a civilian workforce of more than 3,000. In 1941, a bulkhead was constructed farther out into Curtis Creek. Three piers and two floating dry docks were built and moored along the piers. The current waterfront configuration was essentially completed when construction was finished in the mid-1940s. Following World War II, the Yard workforce gradually declined. Site operations, including vessel repair and overhaul, buoy construction, and various manufacturing operations, continued into the 1960s and 1970s. Manufacturing operations were reduced at Hawkins Point throughout the 1980s and 1990s. Major activities in the 1990s centered around the construction of a 3,500-ton shiplift.
Links: www.uscg.mil
2,187 views