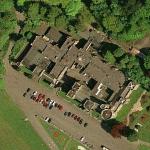 It is not a fortified building, but a house built in the style of a castle, originally designed in 1824 by the Scots architect Robert Lugar for William Crawshay II, master of the Cyfarthfa Ironworks. It cost about £30,000 to build, and stands in 160 acres of parkland.

The Crawshays lived in the house until 1889. In 1993 the refurbished house was opened to the public by Merthyr Tydfil County Borough Council, and it receives an estimated 12,000 visitors a year.
Links: homepage.mac.com, en.wikipedia.org
1,087 views