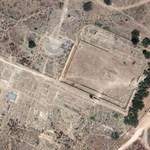 By DonMartini @ 2007-07-02 08:57:53
@ 32.818089, 21.858003
Shahat, Libya (LY)
Cyrene, the ancient Greek city (in present-day Libya) was the oldest and most important of the five Greek cities in the region and gave eastern Libya the classical name 'Cyrenaica' that it has retained to modern times. It lies in a lush valley in the Jebel Akhdar uplands. It was named after a spring, Kyre, which the Greeks consecrated to Apollo.

Cyrene was founded as a colony of the Greeks of Thera, traditionally led by Aristotle (later called Battus) of Thera, about 630 BC, ten miles from its port, Apollonia (Marsa Sousa). Details concerning the founding of the city are contained in Book IV of the Histories of Herodotus. It promptly became the chief town of the ancient Libyan region between Egypt and Carthage (Cyrenaica), kept up commercial relations with all the Greek cities, and reached the height of its prosperity under its own kings in the 5th century BC. Soon after 460 BC it became a republic; after the death of Alexander the Great (323 BC) it passed to the Ptolemies and fell into decay.

Cyrene is now an archeological site near the village of Shahat. One of its more significant features is the Temple of Apollo which was originally constructed as early as 7th century BC. Other ancient structures include a Temple to Demeter and a partially unexcavated Temple to Zeus (the latter was intentionally damaged under orders of Moammar Al Qadhafi in the summer of 1978). There is a large necropolis approximately 10 km between Cyrene and its ancient port of Apollonia.
Links: en.wikipedia.org
1,195 views