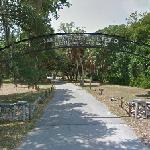 Under the title of Dade Battlefield Historic Memorial, it is also a U.S. National Historic Landmark (designated as such on April 14, 1972).
Links: en.wikipedia.org
490 views