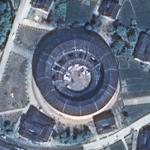 A tulou is usually a large, enclosed and fortified earth building, rectangular or circular in configuration, with very thick load-bearing rammed earth walls between three and five stories high and housing up to 80 families. Smaller interior buildings are often enclosed by these huge peripheral walls which can contain halls, storehouses, wells and living areas, the whole structure resembling a small fortified city.

The fortified outer structures are formed by compacting earth, mixed with stone, bamboo, wood and other readily-available materials, to form walls up to 6 feet (1.8 m) thick. Branches, strips of wood and bamboo chips are often laid in the wall as additional reinforcement. The end result is a well-lit, well-ventilated, windproof and earthquake-proof building that is warm in winter and cool in summer. Tulous usually have only one main gate, guarded by 4–5-inch-thick (100–130 mm) wooden doors reinforced with an outer shell of iron plate. The top level of these earth buildings has gun holes for defensive purposes.
Links: en.wikipedia.org, www.latimes.com
390 views