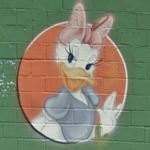 By adrbr @ 2012-08-18 05:58:00
@ -23.514872, -46.416023
São Paulo, Brazil (BR)
Daisy Duck is a cartoon character created in 1940 by Walt Disney Productions as the girlfriend of Donald Duck. Like Donald, Daisy is an anthropomorphic white duck, but has large eyelashes and ruffled tail feathers to suggest a skirt. She is often seen wearing a hair bow, blouse, and shoes. Daisy usually shows a strong affinity towards Donald, although she is often characterized as being more sophisticated than him.
Links: en.wikipedia.org
451 views