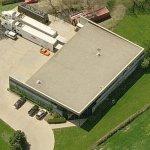 In 2007, the team fielded cars in the Champ Car World Series for Brazil's Bruno Junqueira and England's Katherine Legge. 2008 marked the debut of the team in the IRL, as the Champ Car Series has gone bankrupt.