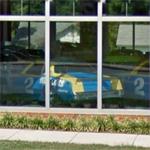 By milwhcky @ 2014-05-20 16:56:50
@ 35.492903, -80.63153
Kannapolis, North Carolina (NC), US
Dale Earnhardt drove these two cars to his first NASCAR Winston Cup title in 1980. He drove an Oldsmobile on the superspeedways and a Chevrolet on the short tracks. Earnhardt won five races and the Busch Clash en route to a narrow 19 point advantage in the final points standings over Cale Yarborough.

These cars are on display at the Curb Motorsports Museum in Earnhardt's hometown. Several other cars can be seen through the windows in these street view scenes. The museum is owned by Mike Curb, founder of the Curb Records country music record label, which has been a long-time sponsor of many auto racing teams.
Links: en.wikipedia.org, en.wikipedia.org, www.youtube.com
1,293 views