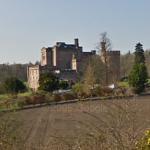 Dalhousie Castle has seen much history. King Edward I (Longshanks) stayed at the castle on his way to meet Sir William Wallace at the Battle of Falkirk.
Links: en.wikipedia.org
483 views