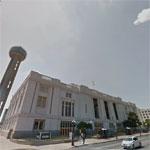 By jbottero @ 2013-07-13 19:40:49
@ 32.775815, -96.806883
Dallas, Texas (TX), US
Union Station, also known as Dallas Union Terminal, is a DART Light Rail, Trinity Railway Express commuter rail, and Amtrak intercity rail station located in the Reunion district of Downtown Dallas, Texas (USA) on Houston Street, between Wood and Young Streets. The structure is a Dallas Landmark and is listed on the National Register of Historic Places.

Constructed in 1916 as Dallas Union Terminal, the structure now known as Union Station was built to consolidate five rail stations scattered around Dallas into one, making Dallas a major transportation center in the Southwestern United States. At the peak of its usage, as many as 80 trains stopped each day at the station.
Links: en.wikipedia.org, virtualglobetrotting.com
590 views