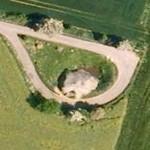 Damestenen consists of medium-grained granite, it is red-gray and has several places narrow strip of the igneous rock diabase.
Links: www.jemelv.dk
688 views