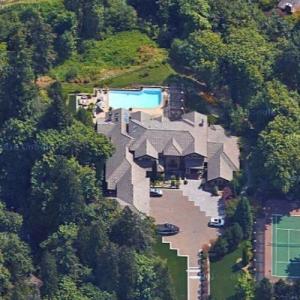 By Xeba73 @ 2014-04-25 04:22:31
@ 45.37771995, -122.62265915
Lake Oswego, Oregon (OR), US
Damien Lillard, the American professional basketball player for the Portland Trail Blazers of the National Basketball Association, purchased this 15,000 sqft waterfront home in 2017 for $6.65 million. Now a point guard, Lillard previously played college basketball for the Weber State Wildcats and earned third-team All-American honors in 2012. After being selected by Portland with the sixth overall pick in the 2012 NBA draft, Lillard was unanimously voted the NBA Rookie of the Year. He has received five NBA All-Star selections and is one of two players in Trail Blazers franchise history, along with Clyde Drexler, to become a five-time All-Star.

Damian Lamonte Ollie Lillard has a net worth of $50 million. He signed a contract with the Portland Trail Blazers in 2014 for $3.202 million per year for four years. Lillard was not highly regarded initially by scouts, and was therefore not heavily recruited out of high school and played basketball for Weber State University. But this would be where Lillard's career truly l began to take off. In 2012, he was drafted in the first round with the sixth overall pick to the Portland Trail Blazers, making him the highest selected player coming out of Weber State University. Since playing for the team, he was named co-MVP of the NBA Summer League in 2012, won the NBA All-Star Weekend Skills Challenge in 2013, was later named Western Conference Rookie of the Month for the whole 2012-13 season, and the NBA Rookie of the Year in 2013. At the beginning of the 2014 season, Lillard continued to be an effective player. He sinks a large number of free throw shots and his aggression, ability, and willingness to absorb contact created easy scoring opportunities. In his first playoff game, he scored 31 points with nine rebounds and five assists, making him one of only four players under the age of 24 to hit those milestones during a playoff season; the other three were James Harden, Kevin Durant, and LeBron James. In addition to his performance on the court, Lillard has a lucrative new shoe deal with Adidas.