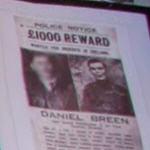 During the Irish War of Independence, Breen had a £10,000 price on his head.
Links: en.wikipedia.org
609 views