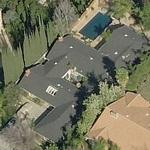 Schneider and his wife Lisa Lillien have owned this Encino home since 1999. He also another house nearby as well as a much-larger mansion in Hidden Hills.
Links: en.wikipedia.org
2,514 views