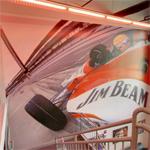 Wheldon earned the 2003 Rookie of the Year honors in the IndyCar Series. He joined Andretti Green Racing at the third event of the season, effectively replacing the retiring Michael Andretti. In 14 races, he scored five top-5 finishes.

He won his first IndyCar race (and two more) in his sophomore season with this same team. In his third season with Andretti Green Racing, he won six times, including the Indy 500 and the season points championship.