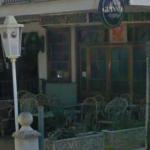 Since January 2010 she is part of the show Goodbye Deutschland! Die Auswanderer that shows the structure of her cafe in Santa Ponsa in Mallorca...(more...)