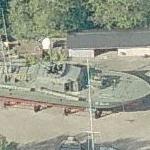 Motor-torpedo-boats (MTBs and later GTBs) were introduced into the Danish Navy after World War II, when Denmark from the Allied received a number of former German MTBs – of the S- class.

These boats were named after birds – the GLENTEN (Kite) and the VIBEN (Lapwing) classes. They were later supplemented by boats of an improved design, the FALKEN (Falcon) and the FLYVEFISKEN (Flying Fish) classes, built at Danish shipyards among them the Royal Dockyard. Both the German and the Danish built boats were propelled by three Mercedes diesel engines each, giving them a max. speed of approximate 40 knots.

In principle the first mentioned are built like ordinary ships, whereas the "slide-boats" popular speaking, are built like the speed-boats you can see on the Limfjorden.

The SØLØVEN class was introduced as successors to these MTBs. Built after the "slide-boat" principle, they had a displace-ment of 114 ton, were 30 meters long, with a beam of 8 meters and a draft of only 2.5 meters. The boats, when first built, were unique. They were built without frames and were among the first ships to be propelled by gas turbines. The main machinery consisted of 3 Rolls-Royce-Proteus gas turbines with a total of 12.600 HP, which gave them a speed of more than 50 knots and a range of 300 NM. For the purpose of in-port-manoeuvring and normal cruising, 2 General Motors diesel engines were installed, each at 200 HP, which gave them a speed of 10 knots. In addition to this, the boats were equipped with 2 small Rover gas turbines as auxiliary engines.

The SØBJØRNEN was armed with four 53 cm torpedoes and two 40 mm Bofors guns or alternatively with two 53 cm torpedoes, one 40 mm gun and a number of mines. She had a crew of 27 men: 5 officers/petty officers and 22 sailors.

The MTBs mostly operated during night Great speed combined with advanced tracking systems and low draught meant that they were designed to launch surprise attacks with good chances of escaping the enemy afterwards. During daytime the MTBs could be re-supplied, which because of their low draught, could take place almost anywhere, and the crew could rest. Earlier the MTB´s were re-supplied from a tender, but lately from mobile units. Moored and camouflaged the MTB.s are very hard to detect from enemy aircraft.

By the political defence-agreement in 2001 it was decided to abolish all MTB´s. A unit of the WILLEMOES-class will be preserved and exhibited in Copenhagen.
Links: www.aalborgmarinemuseum.dk
7,596 views