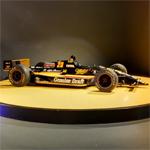 Sullivan's career lasted from 1982-95. He won 17 career races and the 1988 season championship. He is best known for this "Spin & Win" in the 1985 Indy 500, in which he did a 360 degree spin just after taking the lead from Mario Andretti. He spun without damaging the car and recovered to win the race. He also competed in one Formula 1 season with the Benetton Tyrrell team in 1983.

After his driving career ended, he worked as a television commentator for ABC and ESPN.
Links: en.wikipedia.org, www.youtube.com
393 views