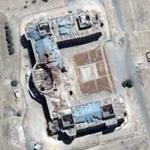 By doranchak @ 2005-06-29 20:17:33
@ 34.46541, 69.119539
Kabul, Afghanistan (AF)
The palace built by King Amannullah in the 1920s is set into a small hill in front of the Kabul museum with the once impressive four-mile avenue (once lined with poplars) past the former Soviet embassy, schools and ministries leading to it. Fighting from 1992 onwards destroyed the building but it remains one of the most impressive, albeit shattered structures in Kabul. The palace was used by King Amannullah and was later used as the Justice ministry and Defence ministry. The equally striking former Defence Ministry is on the hills behind.
Links: www.kabulguide.net
2,817 views