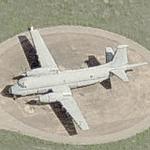 By adrbr @ 2008-02-09 20:06:08
@ 39.243105, 9.057598
Cagliari, Italy (IT)
The Breguet Br.1150 Atlantique is the only sea-reconnaissance airplane specifically designed and built for this purpose, instead of refitting or modifying existing designs. Though the primary mission of the Atlantique is anti-submarine and anti-surface warfare, its secondary role includes search and rescue, mine laying and detection and long-range maritime surveillance.

The Atlantic/Atlantique can carry either nine guided ASW torpedoes such as Mk 46 Torpedo or 12 depth charges or four AM.39 Exocet Anti-Ship missiles in its internal bomb bay. Conventional bombs are theoretically possible, as well as unguided rockets in underwing pods. German Atlantiques usually carried Mk 46s only and flew unarmed during the last years of their service.
654 views