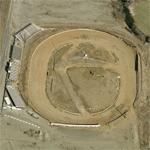 Originally was a dirt track called Henry's Speedway when it was opened in 1967. It was paved in 1977, but went back to dirt in 1997 and was renamed the Benton County Speedway. The Kamp family bought it in 2002 and renamed it Kamp Motor Speedway.

The Kamp's closed the track after the 2009 season to tend to family health issues. In 2013, the Daugherty family purchased the track and renamed it Daugherty Speedway.
Links: www.youtube.com, daughertyspeedway.com
988 views