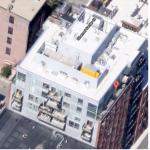 Dave Everett (born c. 1981) is an American inventor and entrepreneur. He is the son of computer scientist Robert Everett. In 2005 he dropped out of Emerson College after his invention was submitted in a college marketing project and earned him a D. He worked with his father to develop a business for the invention, the wearable flat screen television known as "AdsOnFeet", where he served as president from 2004 to 2008 when the company was sold to a private equity firm.
Links: en.wikipedia.org
1,096 views