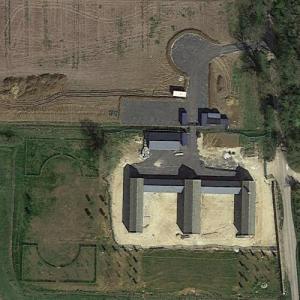 By mlc1us @ 2018-01-20 18:43:23
@ 51.95222171, -1.41811068
Chipping Norton, United Kingdom (GB)
English footballer David Beckham’s house and his wife, English singer and actress Victoria Beckham’s house is a 9,000-square-foot home on two acres in the rural Cotswolds in England. The Beckhams purchased the property in 2017 for about £5 million and spent over £2 million renovating. The renovations included combining and converting three barns into contiguous living space, the addition of an entire lake, and of course, a football pitch. The house is very close to the exclusive Soho Farmhouse member’s club.

The Beckhams also own several other pieces of property including a $4 million home in the south of France and a $41 million West London mansion. They have previously owned a 24-acre home known by the media as “Beckingham Palace”, which they purchased in 1999 for $3.3 million dollars and renovated for $4 million more. Beckingham Palace was sold in 2014 to insurance tycoon Neil Utley for £12 million. In 2007, The Beckhams purchased a Beverly Hills mansion for $18.7 million and sold it in 2018 for $33 million. Prior to relationship with Victoria, David had lived in a four-bedroom house he’d purchased in 1995.