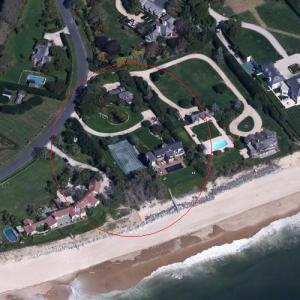 By CelebrityStalker @ 2016-05-18 06:09:58
@ 40.93748, -72.2132076
East Hampton, New York (NY), US
Music executive and entrepreneur, David Geffen is widely reported in May to have purchased this 2.04 acre property for an estimated $70 million. He already owns a substantial 6 acre property nearby amongst his other trophy properties. It is arguably overpriced considering the relatively small plot and the comparatives in the local area. There is also a whisper that he has sold his previous East Hampton abode for around $50 million which is what he paid for it in late 2014 from Courtney Sale Ross. In the Geffen portfolio includes one of the largest stretches of Carbon Beach in Malibu which is widely rumoured to be listed for $100 million, a 17,000 sqft Upper East Side penthouse as well as a storied 10 acre compound in the ultra-chic neighbourhood of Beverly Hills.
Links: en.wikipedia.org
1,973 views

mlc1us
@ 2016-05-18 08:17:32
Welcome to VGT!
Going forward, please be sure your maps comply with submission policies - http://virtualglobetrotting.com/submit_policies/