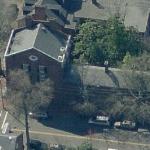 He is currently Vice-Chairman International of Credit Suisse.

Current Secretary of the Treasury Timothy Geithner served as a special assistant to Mulford at the Treasury during the administration of George H.W. Bush.