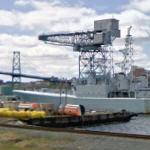 There were seven ships of the class commissioned between 1958 and 1959.

The most noticeable difference between the St. Laurent and Restigouche classes was that the latter had the bridge raised one full deck higher in order ot see over a new forward Vickers 3"/70 Mk.6 gun mount.
Links: en.wikipedia.org
1,637 views