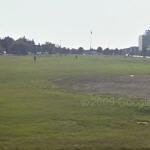 Known to the Anchorage community as the Park Strip, Delaney Park is the oldest park in the city. It was established as part of the original Anchorage township plat in 1917, and named for James Delaney, one of the first mayors of Anchorage.

The park was originally used simply as a firebreak, but in 1922 it became “The Golf Course”. The community used the space both for a golf course and an airstrip. In 1929, however, Merrill Field opened, so the Delaney Park airstrip was no longer necessary.

In 1954, the Parks & Recreation Department began to develop recreation facilities for a variety of activities and events, including ice skating, softball, horseshoes and later, tennis. In 1958, the Park Strip hosted the Alaska Statehood Celebration.

Presently, the park is used for a variety of community events, sports and festivals year-round.
Links: en.wikipedia.org
822 views