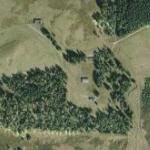 The Lodge will compliment Birkhall which Charles inherited from the Queen Mother. Delnadamph is about 12 miles away from Birkhall.
Links: en.wikipedia.org
2,804 views