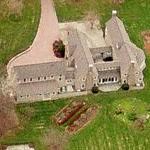 Dennis Sisco's house, located in the Hattertown Histroic District section in the town of Newtown, Connecticut, sits on 29.45 acres of land. The home was built in 1986 and has 9,076 square feet of living space. The home is currently appraised for $1,552,743, according to public property records.
Links: www.bloomberg.com, www.linkedin.com, www.secform4.com, en.wikipedia.org, images.nictusa.com, www.mcdaniel.edu, www.gcsii.com
2,496 views